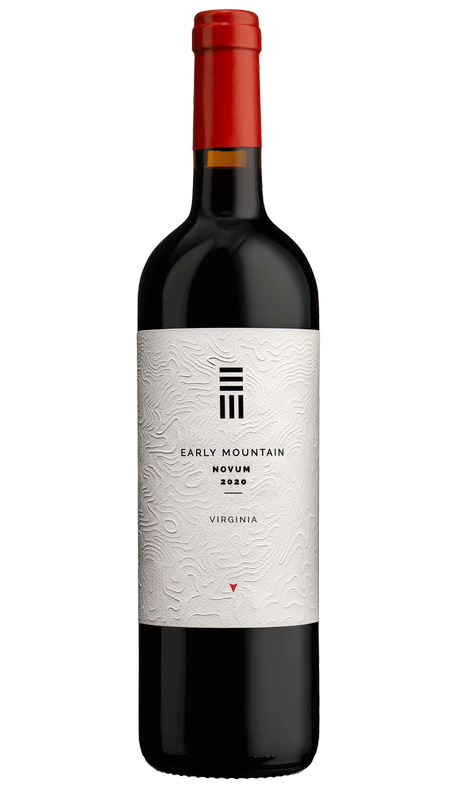 The nose presents with bright cherry and currant, fresh and vibrant leading to attributes of cola, Damson plum, baking spices and dried marjoram, supported by earthen and ever-generous forest floor notes coming from the Cabernet Franc.  The palate is textured and lively, with moderate density supported by a unique tannin and acid dynamic coming from Tannat.

Winemaker Notes
Novum has always had a special place in my heart, it is a wine that always so uniquely expresses the vintage. We work with so many exciting Cabernet Franc sites, and have always found Tannat extremely complimentary to it, that this wine ends up being an exploration of Virginia. Novum continues to be an exercise in Cabernet Franc as expressed in a Bordeaux style blend. In 2016 we began to build the wine with fruit from Quaker Run, but we have since started working with two additional mountainside sites that have elevated all of our top tier reds. One of these, Capstone, is now important to Novum, working in tandem with the fruit from Quaker as the majority of the blend. Stylistically, the 2020 veers less West Coast, and more European, embracing a classical vintage for Virginia, demonstrating aromatic intensity and restrained power.
Vineyard Notes
The growing season in Virginia was dynamic to say the least, adding to the chaotic nature of the year as a whole. Despite an early budbreak followed by frost risk in late April and early May, Early Mountain was lucky to avoid the worst of it with only a Petit Manseng block and some lower areas of Chardonnay impacted. The first half of the growing season was relatively dry and quite hot in June and July. Late July and early August brought a lot of moisture that was very challenging, but things dried out a bit heading into harvest. We ended up in a dance with the Atlantic, as tropical systems waltzed through every ten days for two months. Once again, we were lucky to be spared the worst of the weather, and we emerged at the end of harvest with a cellar full of high quality 2020 wines. In the spirit of every vintage being different than every other in our state, 2020 was unique in that the first half produced lighter wines with high acid and the second half brought riper, more classic wines.

Aging
Aged in primarily larger format French and northern European oak, 35% new, for 16 months. This is drinking well now, in a young and intense way. It should develop well over the next five to seven years, if properly cellared.