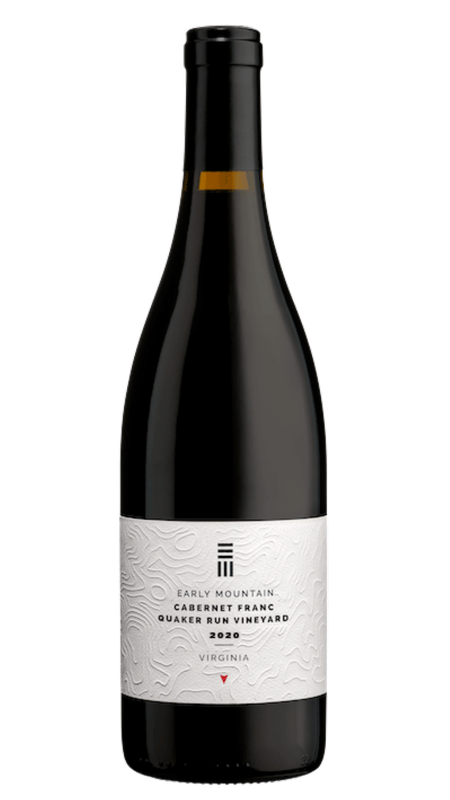 The 2020 Quaker Run Cabernet Franc is uniquely one of the more savoury bottlings. We typically prefer to work with reduction in Cabernet Franc, and this vintage is no exception, highlighting the forest floor attributes, tobacco leaf and the unique toasted herb character of the site.  These aromas are rounded out by red stone fruits, fig, black pepper and marjoram.  The palate brings light to moderate density, with fine, persistent tannins.

Winemaker Notes
This is our fifth vintage of bottling Block 1 of Quaker Run Vineyard on its own, and we love tasting it in contrast to the other four Cabernet Franc bottlings from 2020. Quaker Run manages to bring more structure and density without being overly tannic or acidic; mostly we find amplification of precision, and the wine carries the hallmark of mountain fruit that we find in most wines from Quaker Run: purity. It is also the Cabernet Franc where we find the most beauty in aroma, and our approach is always to understand and convey the fragrance of the fruit from this slope.
Vineyard Notes
The growing season in Virginia was dynamic to say the least, adding to the chaotic nature of the year as a whole. Despite an early budbreak followed by frost risk in late April and early May, Early Mountain was lucky to avoid the worst of it with only a Petit Manseng block and some lower areas of Chardonnay impacted. The first half of the growing season was relatively dry and quite hot in June and July. Late July and early August brought a lot of moisture that was very challenging, but things dried out a bit heading into harvest. We ended up in a dance with the Atlantic, as tropical systems waltzed through every ten days for two months. Once again, we were lucky to be spared the worst of the weather, and we emerged at the end of harvest with a cellar full of high quality 2020 wines. In the spirit of every vintage being different than every other in our state, 2020 was unique in that the first half produced lighter wines with high acid and the second half brought riper, more classic wines.